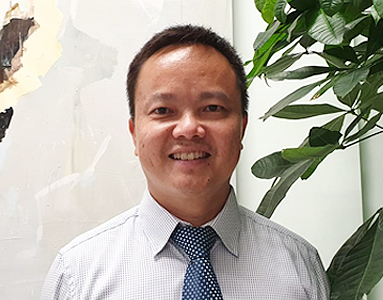 He graduated from National University of Singapore with the Gibb’s gold medal in 1995, followed by MRCP (UK) in 2000 and specialist accreditation in Medical Oncology in 2004. He spent time at Burnham Institute in La Jolla and Roger Moores Cancer Centre in San Diego under the Health Manpower Development Programme award. He was working at the National Cancer Centre Singapore for majority of his career, with a 3 year-stint intercalated at Raffles Cancer Centre where he was director of clinical research, before joining Curie Oncology.

Throughout the years, he was involved in clinical work, clinical trials and teaching. Among his many achievements, he was one of the first who published on the clinical characteristics of lung cancer among the never-smokers. That was at the time when the molecular characteristic of this group of patients was not known yet. It was later discovered that lung cancer in never-smokers formed a big group in our Asian population. He was the lead of the Lung Cancer Consortium project at National Cancer Centre to coordinate lung cancer research in Singapore, which paved the way for many publications and discoveries. He was also part of the team of the Large Collaborative Grant on ‘Next-Generation Clinical Trials and Integrative Research for Fighting Lung Cancer’ awarded by National Medical Research Council. During the early years, he was one of few oncologists in Singapore to administer high dose interleukin-2 as a form of immunotherapy treatment for kidney cancer and melanoma. Immunotherapy then transitioned to checkpoint inhibitors over the years and became a cornerstone in the treatment of many cancers now. He has led and was a co-investigator in many clinical trials. He was also a member in the workgroup for the Singapore Cancer Network (SCAN) guidelines for lung cancer, kidney cancer, prostate cancer and bladder cancer. In the area of teaching, he was assistant professor at the Yong Loo Lin School of Medicine, NUS and Duke-NUS medical school.

Dr Toh hopes to bring his extensive clinical experience to Curie Oncology and provide good experiential care to the patients, to encourage them; letting them know that, someday, Spring will come.